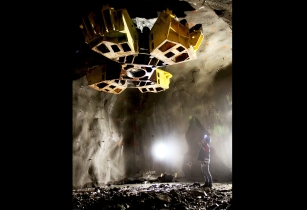 Raise caving is a method that enables mining of the orebody from bottom to top. (Image source: LKAB)

Rock stresses increase as mining moves to ever greater depth. A more complex geometry, in combination with rock-mechanical challenges, places demands on new, sustainable and innovative solutions for the mine of the future. And, underground, safety is paramount.

The greater mining depth has necessitated the development of the new method, raise caving. Both the method and the machine concept, which is an essential part of the mining method, have been developed by LKAB in close collaboration with Montanuniversit?t Leoben, in Austria. Large-scale testing will begin next year in the Kiruna mine.

The method currently applied in LKAB's underground mines, large-scale sublevel caving, has been very successful. This is an effective method that enables mining of large volumes at a relatively low cost.

Matthias Wimmer, section manager in the department of mining engineering at LKAB in Kiruna, said,  ?There are some mines with production at extreme depths, down to as much as 4,000m. However, mines in which some form of large-scale caving is applied have not yet reached such depths. And there is a lot of uncertainty as to whether they can maintain viable production volumes in the longer term.?

Raises are bored and that is the starting point for mining in slices and caving the ore from the bottom to top. This means that mining starts in the raises and is not done horizontally and conventionally by means of so-called drifts. This implies that no people work directly with drilling and blasting, in a conventional sense, within the raises.

From idea to production

?What started as an idea has developed into something much more, thanks to our many committed and innovative co-workers and colleagues. Together, we have developed raise caving based on existing mining methods, well-established de-stressing principles used in deep mines, and combined the best,? concluded Wimmer.