As the quartz market is set to witness a strong growth at a CAGR of more than 4.5 per cent in next five years, TOMRA?s multi-channel laser sorting technology has unlocked the potential to produce high-purity quartz 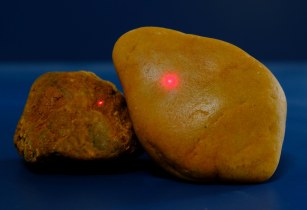 Quartz is one of the most common minerals, found in all forms of rock, but it doesn?t exist in high purity in nature. The challenge for mining operations serving the metallurgical and engineered stone industries is to reliably deliver quartz of consistently high chemical purity ? and for engineered stone manufacturers, a white product with no impurities of the same color, such as feldspar, is also essential.

TOMRA?s patented multi-channel Laser sorting technology unlocks the full potential of quartz deposits with its structural approach to sorting, which is unique in the market. The scattering effect of the multiple laser beams can be used to separate a quartz rock from a similar-looking one containing no quartz:  quartz or quartz veins will appear as a glowing crystal because quartz returns the laser light in a larger area, while others will remain dark with no visible scattering.

According to TOMRA, large and pure crystals can be clearly discriminated from other rocks or minerals with a smaller crystal structure, regardless of the colour or chemical composition. TOMRA?s laser sorter stands out for being a gravity system rather than the conventional conveyor belt, so that both sides of the material are scanned and multiple characteristics such as surface structure, size, shape, brightness and colour distribution are processed simultaneously. Laboratory tests and field experience have shown that the recovery of valuable rocks can be increased by 20 per cent while improving the quality of the product.

Jens-Michael Bergmann, industrial mineral segment manager at TOMRA Sorting Mining, explained, ?The advantages for mine operations are multiple, from a longer life of the mine to lower operating costs and a reduction of waste, with consequent lower haulage costs. It enables them to guarantee consistent high-quality of product to their customers.?

This is due to the reduced waste and low water use, as only a small quantity is required for wet washing the rocks at the beginning of the process to avoid dust in the processing plant. It eliminates the need for hand picking, which is required with colour sorting to achieve the high purity levels demanded by the metallurgy and engineered stone industries.

Spanish company Erimsa has turned to TOMRA for its Laser technology to sort good quality quartz regardless of the colour. Carlos Forj?n from Erimsa said, ?The main problem we have is in the complexity of sorting automatically when the quartz and the rejectable minerals have the same color. I thought that Laser technology would be the way to address this.?

Carlos Forj?n stated, ?The TOMRA machine has enabled us to reduce costs while increasing our yield; our production has easily increased by 20 per cent compared to when we used colour sorters combined with hand picking. Material that in the past was lost to the waste pile is now generating profit for us. The stability of the quality is an important goal, and we have achieved this with the laser sorter. It has been such a game-changer in our operation, that we are planning the purchase of a second laser machine to replace an existing colour sorter.?

TOMRA colour and laser sorters in combination to sort by colour, composition and size

Companies that serve different industries need the most precise mineral sorting in order to meet their customers? requirements specific to each sector. This is the case of Mikroman Mining Company, which uses a combination of TOMRA Laser and TOMRA Color sorters to differentiate products according to four qualities: white and light grey quartz with low iron oxide content for engineered stones; grey and yellow quartz for the glass industry; colored quartz for ferrosilicon used in the metallurgical sector; and colored gravel, also for ferrosilicon, which currently goes with the waste.

These precise distinctions, resulting in higher product quality, were not possible before the acquisition of the TOMRA machines, and the company operates 13 colour sorters and three laser sorters in its various plants.