TOMRA?s X-Ray Transmission (XRT) sensor-based ore sorting has proved effective in mining operations for a variety of minerals, including chrome 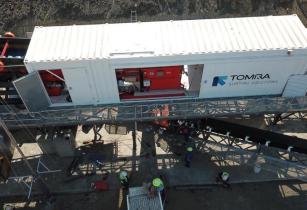 The rise in demand for chrome has been driven in great part by the China-dominated stainless steel industry, which represents more than 75 per cent of chromium consumption. South Africa is a dominant global supplier of chrome ore and ferrochrome, and the biggest exporter to China ? in 2017, it accounted for 73 per cent of the country?s chrome imports.

South African chrome mining operations have been facing the challenge of meeting this rising demand while dealing with electricity and price constraints. They have been expanding into the larger-scale underground and open-cut operations. This translates into higher costs, as the traditional methods for separating this low-chromite content material, such as Dense Media Separation, cyclones and spirals, are power and water-intensive or require costly agents.

The X-Ray sensor accurately establishes the density of each particle in the feed, and high-speed pneumatic ejectors separate ore with high chromite content from bare or low-grade ore at throughputs between 60 and 200 tonnes per hour. The resulting output is a high-grade product that is ready to sell, with no need for additional comminution. It is a dry process that requires no water or reagents, and is frugal in its energy consumption, resulting in a fraction of the capital expenditure and running costs of traditional methods, as well as a smaller footprint.

Engineering and project management company P2E Consulting has the first-hand experience of the advantages of TOMRA?s XRT technology in sorting chrome ore at Eastern Chrome mines in South Africa.

?We have installed TOMRA sorters on diamond and copper plants in the past and we believe their technology is ahead of their competitors,? stated Craig Meadway, business development executive of P2E Consulting.

P2E Consulting commissioned a TOMRA COM XRT 2.0 sorter to replace an existing drum Dense Media Separation (DMS) plant: ?The mine used the DMS plant to produce saleable Small Lumpy product from the mine?s LG6 Chromite ROM and dumps at a minimum grade of 38 per cent, but it was very inefficient,? explained Craig Meadway. ?The TOMRA XRT sorter has resolved this issue. It is used to upgrade Under Value (UV) material with a head grade of 20 per cent to 28 per cent, to produce a saleable product at a minimum grade of 38 per cent Cr2O3. It does this efficiently and at a low Cost of Production (COP).?

The TOMRA COM XRT 2.0 sorter has exceeded Craig Meadway?s expectations, with grades being achieved in excess of 40 per cent Cr2O3 and mass recoveries of 25 to 30 per cent from scalped waste resulting in Chrome-in-tails as low as 12 per cent: ?No other technology has given us such a high recovery rate. Not only that, with TOMRA?s XRT there was no water usage at all and we didn?t need to spend on expensive reagents so that we are producing Small Lumpy product for approximately 50% of the cost compared to a DMS plant.?

The environmental benefits of TOMRA?s XRT solution were also an important factor in P2E Consulting?s choice of technology: ?We are looking to introduce greener technologies into the mining industry. The fact that no water or chemicals are used is a major advantage,? comments Craig Meadway. ?Also, South Africa has major power limitations, and lower energy consumption when compared to DMS is a huge driving force.?

Easy operation and superior support from the TOMRA team

The easy operation of TOMRA?s XRT sorters is a further advantage: ?It is very easy to use: once the sorter and feed system control philosophy is set up correctly, the plant runs with very little input from the operators,? added Craig Meadway.

TOMRA?s collaborative approach and all-round support was also an important factor in P2E Consulting?s decision to turn to them for this project: ?We knew from our experience in previous projects that the support from TOMRA is very good, and with the installation of this machine in a relatively new application, it was excellent. The local team has bent over backwards to help us make this happen.?