Why water management matters most?

CDE, a provider of wet processing equipment for quarries, mines and recycling operations on the global market, gives a perspective on effective water usage in the extractive industries 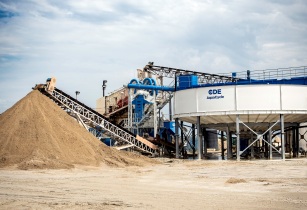 It?s incomprehensible for most. The notion that around the globe we face issues arising from water stress on a planet whose surface area is made up of over 70 per cent water and whose total water volume ? a staggering 96.5 per cent ? is contained within our oceans. Whether for consumption or sanitation clean water in some parts of the world is taken for granted, as we fail to recognise the processes and infrastructure needed to maintain a clean water supply or neglect to acknowledge that basic access to clean water is not universal.

In 2017, 785 million people lacked a basic drinking water service, including 144 million people who were dependent on untreated surface water, 206 million who had access to an improved water source but were required to make a 30-minute trip for collection, and 435 million who were extracting water from unprotected wells and springs, according to WHO.

That aside, the mining and quarrying, manufacturing and construction sectors accounted for 10.6 per cent of total water use in Europe alone in 2017.

CDE recognises that the benefits arising from sustainable practice and processes are two-fold; they are economically advantageous and minimise our impact on the environment. Indeed, they are green from both perspectives. To that end, among the Sustainable Development Goals (SDGs) adopted by CDE is number six: Clean Water and Sanitation.

The Middle East and North Africa (MENA) is home to 6.3 per cent of the world?s population, yet only 1.4 per cent of its accessible freshwater supply, stated an EcoMENA report. Water scarcity issues in the region are compounded by multiple factors such as climate change, water quality, and poor water management practice against a backdrop of fragility and conflict. In 2015, at World Economic Forum, experts on the region suggested the water crisis is ?the greatest threat to the region? greater even than political instability or unemployment.?

?In a region where an incredibly high percentage of GDP is vulnerable to water stress, it?s vital an effective water management strategy is identified ? and ours is an industry that can adapt to the call for better water management. The technology exists and CDE is working with many in the region to set the benchmark.?

Water as a resource delivers economic value to a range of industries. Within the extractive industries, the value of materials is significantly increased when washed, but wet processing in mining and quarrying operations is hinged on water availability and processing plant efficiency.

Garg comments, ?More often its water availability and access that prevents producers getting into the washing business in the first place. That, and the uncertainty around typical top-up water requirements which, in the case of CDE water management solutions, are very low. Our focus is on recycling and recirculating as much water as possible through the system.?