"Mechanisation is imperative to speed up the implementation of India's infrastructure projects," Dr C P Joshi, Minister of Road Transport and Highways, Government of India, stressed at the inauguration of Excon 2011 and added that the growth of infrastructure sector is critical for the country to achieve a sustained economic growth in the next ten years. 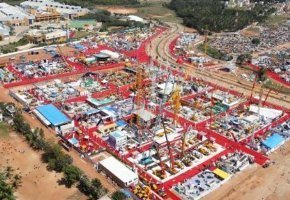 Dr. C P Joshi, Minister of Road Transport and Highways, Government of India, stressed that the growth of infrastructure sector is critical for the country to achieve a sustained economic growth in the next ten years.

The investment made in infrastructure sector in 2011 accounted for 7.9 per cent of the GDP. The figure is likely to increase to 10.7 per cent by 2017. ?During the 12th Five Year Plan the infrastructure investment would be in the tune of US$ 1 trillion.

The Minister said that to fund the infrastructure projects, India should find alternative sources of finance. The government's Infrastructure Investment Fund would soon be coming out with a public issue to raise about Rs 10,000 crore.

He said that the ambitious National Highways Building Programme envisages investment of about US Dollars 70 Billion in next 5 years with a major share by way of Public Private Partnership (PPP).

In his address, Mr T T Ashok, Chairman, CII, Southern Region, said that the government should focus on addressing the issues of the industry in land acquisition, rehabilitation, tolls, among others. He remarked that in the last ten years the construction industry is driving the economic growth of the country. Government used to be the prime players in the past but today private players drive the growth. The portion of infrastructure investment to GDP has doubled in the last ten years, he said.

Delivering his Special Address, Mr B Muthuraman, President, CII, said that India should have a solid manufacturing base, and quality infrastructure to achieve double digit growth. And to achieve both, the country needs quality construction equipments.

He urged the industry to go for high technology absorption, and enhanced design & engineering capability. The industry should try to market itself in a better way so as to attract the best talent.