Acciona will build th Jubail 3B desalination plant, it's sixth in Saudi Arabia 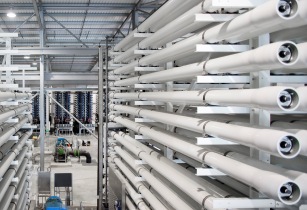 Together with its partner SEPCOIII, ACCIONA will undertake the construction of the Jubail 3B desalination plant and its capacity of 570,000 m3/day will supply 2 million people in the cities of Riyadh and Qassim

ACCIONA and its partner are the main EPC contractors in the project, which will be developed  and financed by a  consortium consisting of ENGIE, NESMA and AJLAN for the publicly-owned Saudi Water Partnership Company (SWCP).

SWPC has announced the financial closure of the project, which is estimated at US$692mn.

The entry into service of the plant is planned for Q1 2024, and it will be handed over under a 25-year build-own-operate (BOO) agreement

With this contract, ACCIONA consolidates itself as one of the main water treatment infrastructure companies in one of the areas with the highest water stress on the planet, the Middle East, and more specifically Saudi Arabia. Once Jubail 3 is completed, ACCIONA will supply around 2.37 million m3/day of desalinated water using reverse osmosis, consolidating it as the most efficient and sustainable desalination technology with the smallest carbon footprint.

The plant will be located in the industrial city of Jubail on the Arabian Gulf coast in eastern Saudi Arabia, around 100 kilometres from Dammam. ACCIONA previously built the Jubail RO4 desalination plant (capacity 100,000 m3/day) on the same site.

ACCIONA will undertake the construction of the entire reverse osmosis system, including the civil works and the pumping of raw water.

The project will include storage tanks for daily production, as well as a solar energy plant to reduce the consumption of power from the grid. To do this, ACCIONA will also build a photovoltaic solar plant. The EPC contract will also include the construction of 58 kilometres of power lines, an electricity substation and the associated marine works.