GCC economy to exceed US$1 trillion 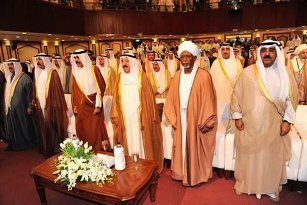 Higher crude prices and output will likely boost the combined nominal GDP of Gulf oil producers to a record high of more than US$1.1 trillion in 2011 while their economies could fully recover within two years, a semi official study has said.

But the study by the government-controlled Emirates Industrial Bank (EIB) said the surge in the economies and public spending by the six Gulf Cooperation Council (GCC) countries could trigger fresh inflation fears next year and proposed price controls and other measures to tackle the problem.

It said the six members, which control over 40 per cent of the world's proven oil wealth, boosted public expenditure by nearly six per cent through 2010 as part of ongoing fiscal expansion measures to counter the repercussions of the crisis.

The study projected the six economies, which account for nearly half the total Arab economy, to grow in real terms by around 5.4 per cent in 2010 and 6.6 per cent in 2011 after a sharp slowdown in 2009 in the aftermath of the crisis.

"It can be said that the GCC countries possess the resources to completely overcome the effects of the global crisis within the next two years," it said. "Our estimates show that in nominal terms, the GCC economies will swell to around US$1.15 trillion in 2011... this will of increase investors' confidence in the region's economies which are now classified as fast-growing economies... these economies are poised to maintain high growth in the next years."

EIB gave no GDP figures for this year and the previous years but estimates by the Washington-based Institute for International Finance (IIF) showed the GCC's combined nominal economy could reach around US$1.01 trillion this year compared with nearly US$877 billion in 2009 and US$1.076 trillion in 2008. IIF estimated the combined non-oil sector in the GCC last year at around US$558 billion and the hydrocarbon sector at nearly US$452 billion.

"These are good indicators but this does not mean the GCC countries have totally overcome the effects of the crisis... more measures are needed to be taken to stimulate some sectors, mainly those which were affect most by the crisis, such as the real estate sector," EIB said.

"Tackling these effects will not be easy as it needs strenuous efforts and a long time despite a sharp rise in public spending and expectations that oil prices will remain high next year... GCC states have the resources to tackle these problems but the most important thing now is to consider restructuring the real estate sector and extending more support for affected banks and other companies."

According to the study, high public spending could ally with recovering domestic demand and the weakening dollar exchange rate to put upward pressure on inflation rates in the GCC following a steep fall in 2009.

"The fiscal expansion policies and other factors have already started to boost inflation rates, which could average three to six per cent in 2011," it said. "But the GCC countries can still take measures to control inflation by diversifying their imports, monitoring and controlling domestic prices, and working on cutting transport costs, now among the highest in the world," EIB said.

In a recent study, a key investment firm in Saudi Arabia warned that the weak dollar, to which most GCC currencies are pegged, have already pushed up inflation in some members back to pre-crisis levels. It cited Saudi Arabia, where inflation in August climbed to its highest level of six per cent in over a year.

"The Gulf countries are fairly rapidly growing emerging countries and hence, in spite of the limited openness of some of their markets, vulnerable to growing capital inflows and consequent asset bubbles," said NCB Capital, which is owned by Saudi Arabia's largest bank, National Commercial Bank.

"An artificially inflated boom in emerging markets would inevitably result in inflationary pressures, a trend which would be amplified by the liquidity effect of a higher oil price and increased costs of imports. The prospect of a period of dollar weakness, through the dollar pegs, would further contribute to such a scenario."

NCBC said that although property price corrections in some GCC countries have given their authorities a temporary respite, inflation is increasingly obviously establishing itself as an overriding policy concern in the region,.

"The ability of the regional economies to respond the external shocks is clearly limited, even if the recurrent pressures in the area of food are likely to fuel growing pressures for national or regional reserves in key agricultural commodities in an attempt to smooth short-term price variations," it said.

"The GCC remains vulnerable to unpredictable shocks, both in the form of food prices and in terms of liquidity waves created by short-term oil bubbles, especially once bank lending normalizes. Temporary policy interventions may once again become necessary to contain inflationary expectations."