The UAE?s minister of economy said that preliminary estimates issued by the Federal Competitiveness and Statistics Authority (FCSA) indicate growth in the economic performance of the country in general; which came as a result of growth in oil resources and rise in international oil prices and growth in non-oil sectors 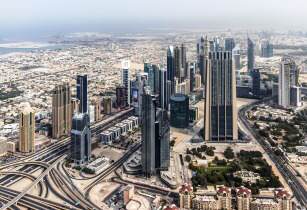 The Dubai Economy Tracker Index (DET) rose to 57.6 in May 2018 from 53.9 in April 2017, signalling the sharpest improvement in business conditions in over a year.

Sultan bin Saeed Al Mansouri also lauded the UAE?s success in economic diversification, expansion of the economic production base, and the importance of strategic initiatives and programmes aimed at increasing reliance on non-oil sectors and the sector?s contribution to the country's GDP.

The minister emphasised the importance of ongoing economic developments in the country, making it attractive for foreign investments on a continuous basis. He also reiterated the importance of foreign trade data to the country and opening up to the world as a component of international economic relations, as it can enhance the success of economic policy and its integration with the nation?s sustainable development and economic prosperity.

According to National Accounts preliminary estimates by the FCSA for 2017, the general results of the preliminary estimates of UAE macroeconomic indicators indicated growth of GDP by 0.8 per cent in real (constant) prices in 2017 compared to 2016. The data also show that GDP estimates for 2017 at real prices (base year 2010) amounted to approximately US$387.19bn in the UAE, compared to about US$384.16bn in 2016.

From an economic diversification perspective, preliminary estimates indicate that estimates of GDP at current prices of non-oil sectors amounted to approximately US$297.29mn, with a growth rate of 3.2 per cent (current prices) and 2.5 per cent (constant prices) the end of 2017 compared to 2016.

In terms of contribution of economic sectors to the current GDP, data showed that activities related to the extraction of crude oil and natural gas have contributed to about 22.3 per cent. Both wholesale and retail trade activities contributed to 12.3 per cent and manufacturing activities amounted to approximately 4.8 per cent, while construction activity contributed with 8.7 per cent.

In real prices, the highest growth rate was recorded by accommodation and food services activity by 8.5 per cent. Electricity, gas, water and waste management activities grew by eight per cent.

The general government sector achieved a growth of 6.2 per cent, health and social services by 4.4 per cent, while the oil sector achieved negative growth (minus three per cent) due to the government?s policy of reducing production, as a result of the increase in global oil prices and other sectors.