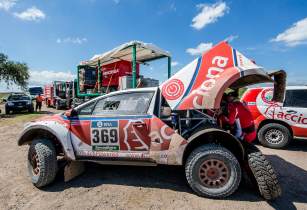 Three support trucks accompanied the electric car on its route around the rally. At the beginning, middle and end of each stage, the vehicles charged their batteries using Himoinsa’s gensets.

This year, the Acciona vehicle incorporated seven new, powerful battery packs and a new six-speed sequential gearbox, which have optimised the electric motor’s performance. The motor is a highly efficient dual-synchronous propulsion unit delivering 340 hp at 6,000 rpm and 800 Nm of torque. The improvement in performance of the Acciona 100% EcoPowered is largely a result of the high-performance battery modules, which can be charged quickly in 60 minutes for the end of each stage, and can be removed quickly and easily for replacement in link sections.

Eduardo Blanco, Acciona Ecopowered Dakar team manager, said, “We’ve used HIMOINSA generators in other, less prestigious competitions and we achieved excellent results. We decided to make HIMOINSA our official supplier for Dakar 2016 and the results have been fantastic.”

He added that there could be no scope for failure, and the equipment had to be dependable in order to supply electricity.

HIMOINSA, which has close links to the Dakar rally through its private team, HIMOINSA Racing Team, is focusing on projects such as this one, which are more connected with its product. “This initiative with Acciona EcoPowered has enabled us to bring our generators to the competition. The race is run over a route of around 10,000km, with stopping points, where bivouac camps are set up, located in remote places with no connection to the electrical grid. Certainly a situation in which generators are essential,” said HIMOINSA’s executive director Francisco Gracia.