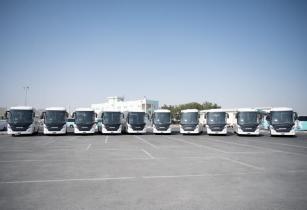 Al Mariah General Transport, one of the pioneers in passenger transport services in the UAE, has expanded their fleet with another 29 Scania Marcopolo luxury buses

With an aim to help the executive staff transport at the time of the pandemic, the company is opting for BioSafe buses. This has been the first in the UAE, which comprises of multiple features such as integrated sanitising points, driver protection shield, disinfection of the air and the surfaces inside the toilet by means of UV-C and many more, to be benchmarked as the most safest and most environment friendly coach fleet in the country.

“The story starts from first quarter of the year, when we won a prestigious project for the executive staff’s transportation in the Western Region of Abu Dhabi emirate. Bin Brook’s sales and after sales team, have been actively participating in the discussion since the beginning, providing all technical and commercial solutions, as a reliable partner. Our experience together was more than a decade old and we complimented each other for a successful execution of the project,” said Ahmed Al Naggar, group managing director.

The buses have been delivered in December and will be in operation starting this new year. This is a big addition to the existing fleet of Scania buses with Al Mariah General Transport, who is now the biggest fleet owner of Scania coaches in the country.  “The challenges were many, which were inevitable due to the outbreak of COVID-19 pandemic, immediately after the order was confirmed. Our principals, both Scania and Marcopolo were not exempted from the after effects. Despite all lock downs and logistic disruptions, with the great efforts from all stake holders, we managed to bring the buses to Abu Dhabi on time before the scheduled delivery,” commented Ayman Hafez, general manager of Bin Brook Motors.

“The BioSafe concept was introduced during the production time at Marcopolo and luckily we could incorporate it,” stated Mansur Ali, sales manager of Bin Brook Motors.