SAR to link Dammam and Jubail with 130-km rail line 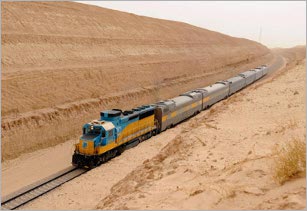 Saudi Railway Co. (SAR) will construct a 120km railway to link the country's two industrial hubs of Dammam and Jubail.

The planned line will be linked to a railway that will connect the two Saudi industrial hubs of Ras Al Zour and Jubail on the Persian Gulf coast, it said but did not specify the cost of the project or when it will be tendered.

The new railway line is part of the company's plan to link the kingdom's industrial cities to its vital ports.

In August, SAR will launch a tender for the Ras Al Zour and Jubail line and bidders are to be given three months to submit their offers.

Contracts for the railway, which is part of a larger rail line connecting Ras Al Zour with the phosphate and bauxite mines at Al Zabirah in northern Saudi Arabia, are expected to be awarded early next year.