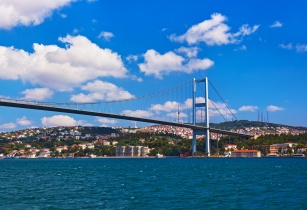 The ground-breaking ceremony of Canal Istanbul was held with the participation of president Recep Tayyip Erdoğan and minister of Transport and Infrastructure, Adil Karaismailoğlu

Adil Karaismailoğlu, the minister of Transport, said, “With the Canal, Turkey will be among the world's leading logistics powers. 500 thousand people will be employed, and an economic contribution of US$28bn will be made. Turkey will become a playmaker in global maritime trade.”

Why the Canal Istanbul?

Detailed analyses conducted within the framework of the Turkey Logistics Master Plan, which aims to make Turkey a global logistics power in the new world order, to develop Turkey as a whole, and to create more employment also revealed the need for an 'alternative waterway' transportation corridor in the region due to the increasing ship and cargo density in the Straits System.

It is aimed to manage the ship traffic of Istanbul, which is located at the intersection of the Central and North-South corridors, and to raise Turkey to a leading position in the world's trade corridors thanks to the Canal Istanbul, which was designed to meet this need.

‘Turkey will be the most important logistics centre of the world’

Reminding that within the framework of this plan, many projects such as Istanbul Airport, Filyos Port, Baku-Tbilisi-Kars Railway, Istanbul-Izmir Highway, Yavuz Sultan Selim Bridge have been put into practice, they have determined development areas, initiated breakthroughs in maritime transport and reform movements in railways.

“One of the most important pillars of Turkey's growth vision in the last 19 years is the claim we have made in terms of our transportation, communication and logistics infrastructure.

As a country that dominates the most important trade corridors of the developing world, Turkey will become the world's most important logistics centre with the Canal Istanbul. Thus, the Black Sea will turn into a trade lake for Turkey,” continued Karaismailoğlu.

The Canal Istanbul, where 204 scientists take part in the engineering work, will fulfil an important task in highlighting the Istanbul Valley, which is at the crossroads of the world, and in establishing a logistics base, technology development and living centre in Turkey by creating a sustainable new generation city.

The Canal Istanbul, which is Turkey's vision project in every aspect to protect the historical and cultural texture of the Bosphorus, to reduce the load caused by maritime traffic and to ensure traffic safety, will be put into the service of the country as an alternative waterway in Marmara, the locomotive of the Eurasian region.