Dake Rechsand makes its mark at Food for Future Summit 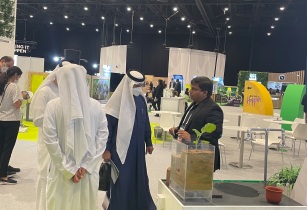 Dake Rechsand, the Dubai-based company specialising in sustainable solutions for water conservation and desert farming, made its mark at the inaugural Food for Future Summit on February 23-24

The summit hosted by the UAE Ministry of Climate Change and Environment with the United Nation?s Food and Agriculture Organisation (FAO) as a strategic partner, ushered in a new era of multistakeholder participation for global food security.

Dake Rechsand?s Breathable Sand, also known as ?magic sand? due to its transformative potential, has been making waves in the Middle East and beyond ever since its launch, thanks to its ability to make instant, demonstrable impact. The attendees at the Food for Future Summit were treated to the "magic", through illustrative demonstrations involving water, soil, and the Breathable Sand.

?The world is nearing a tipping point on climate change, and food and water are becoming scarcer by the day. This scenario is more pronounced in the Middle East, which has, what I like to call, pre-existing conditions that make counter measures a tall order. Dake Rechsand is striving to address such conditions and simplify food security and sustainability pursuits,? said Chandra Dake, founder of Dake Rechsand.

The Gulf Sustainability Gold Award Winner 2021 for Innovation in sustainable technologies, Dake Rechsand has rooted its solutions in technology, holistic sustainability, and environmentally responsible processes. Its Breathable Sand is a low-cost, water-retentive and air-permeable medium made from typical desert sand. In agricultural application, the water-retentive medium reduces irrigation requirement by 80% compared to conventional techniques while enabling high yield due to its air permeability. As a result, Breathable Sand has found application in desert farming, a practice that could potentially drive the region?s food security.