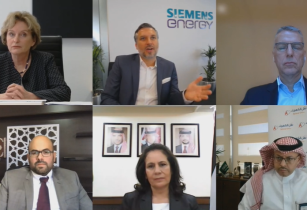 The third day of the Siemens Energy MEA Energy Week conference, in partnership with the DIHK, Ghorfa, GMIS and Masdar, focused on sustainability

The world’s energy system is facing profound changes. Innovations in the way energy is generated, distributed and used, as well as the ways in which energy systems operate and link with wider infrastructure, are paving the way for completely new landscapes around the world. However, the expansion and decentralisation of actors and technologies in new clean energy landscapes can create uncertainty and pose significant challenges in coordination. This was the main question tackled in the session.

The conference started with a keynote address from Dr Afif Saif Al Yafei, CEO of Abu Dhabi Transmission and Despatch Company (TRANSCO) who spoke about how grid operators and countries can take the full advantage of digital technologies.

However, this is only one piece of the energy puzzle. Other elements include the restructuring of the power grids to be able to accommodate to the power shifts. Power grids are seen as the true enabler that controls, analyses and transmits this clean energy to people and industries. How the grid evolves will determine how economical the transformation to these cleaner energy resources will be, and therefore how quickly they are adopted.

“Internet of Energy is here but it relies on internet of things. That’s why Siemens Energy has started connecting power transmission projects to optimise use cases for customers,” said Beatrix Natter, executive vice-president transmission, Siemens Energy. “This was the first step to move with the connection of substations. The company is also working now on the digitalisation of substations. The real-time data can be used to analyse and optimise the performance providing the grid operators with actionable insights.”

The third element to introduce the Internet of Energy that Siemens is working on is the automation of power grids to allow the electricity interconnection projects across countries – across different voltage levels and on large scale, according to Natter. “These different elements will help optimise the energy flow in buildings, industry and mobility for more decarbonised future.”

Speaking about the increase in the price of renewable energy, Andreas Nauen, CEO of Siemens Gamesa Renewable Energy, highlighted that technology providers like, Siemens Gamesa keeps on investing in technology to make renewable energy more cost-effective, adding that the integration of the renewables into power grids still “overly costly” and this is not because of the technology rather than how power networks are being run and how it was designed. Setting the regulatory legislations between countries is another important element to allow the expansion in the renewable interconnection projects between countries.

“What is needed to stimulate the large-scale deployment of renewable projects is an integrated approach by technology providers, legislators and policy makers, developers as well as grid operators,” he concluded.

Discussing the most effective scenarios to integrate renewables within the national power transition plans, HE Hala Zawati, Jordan Minister of Energy and Mineral Resources, commented, “Jordan managed to increase the country’s power capacity from renewable energy from 1% in 2014 to around 18% in 2020 through setting the enabling legislative framework, providing the financial packages and the technology to allow consumers to turn into prosumers of power.” She concluded that these measures have to be customised according to the energy landscape in the country and the share of renewables within its energy mix.

The discussion has concluded that grid assessments play also a big part to define the best way forward to modernise power grids. It is more efficient to enhance the existing power grids, adopting a brownfield approach. Siemens Energy has managed to successfully complete a power interconnection project between Belgium and Germany through grid automation.

The second and final panel of the day, entitled “Driving sector coupling: The hydrogen economy starts today!”, examined how the public and private sector can work together to enable the large-scale industrialisation of hydrogen.

“Availing of blue hydrogen, I think is a great intermediate solution because it is similar in cost to grey hydrogen, with a small premium due to the carbon capture requirement, but that allows the build-up of a trade in hydrogen at scale and allows existing industries to utilise that,” he added.

“Even if it takes decades to come to what we are targeting, we need to start today,” Schnettler said.