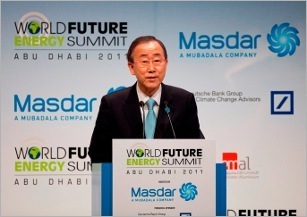 Ban Ki-moon, Secretary-General of the United Nations, will return to the World Future Energy Summit (WFES) 2012 to launch the International Year of Sustainable Energy for All.

The Secretary-General has set three objectives for his Initiative to be achieved by 2030: ensure universal access to modern energy services; double the rate of improvement in energy efficiency; and double the share of renewable energy in the global energy mix.

"I expect this Summit to bring forth serious commitments to the Sustainable Energy for All Initiative...commitments that reduce energy poverty, foster economic dynamism, and protect our planet," the Secretary-General said. "That is why I am here, and why this initiative is among my top priorities."

The initiative is mobilizing commitments from business, the financial sector, government, and civil society in the run-up to the Rio+20 Conference on Sustainable Development, seeking to catalyze actions across the public and private sector that further his objectives.

Dr. Sultan Ahmed Al Jaber, Chief Executive Officer of Masdar and the UAE Special Envoy for Energy and Climate Change, said "Achieving energy security through renewable energy and energy efficiency are the core of our strategy towards diversifying our energy mix in the UAE. Launching the International Year of Sustainable Energy for All from Abu Dhabi at the World Future Energy Summit presents a perfect fit. We are honored that the Secretary-General chose Abu Dhabi for this crucial activity."

Access to energy is a global issue and one that is an often overlooked in the issue of poverty. According to the United Nations, more than 1.4 billion people worldwide have no access to electricity, approximately 3 billion people rely on traditional biomass for cooking and heating and up to a billion more have access only to unreliable electricity networks. The "energy-poor" suffer economic consequences of insufficient power for productive income generating activities and for other basic services such as health and education.

The UAE has prioritized the development of renewable energy and energy efficiency. In the past five years, it has broadened its energy portfolio to deploy renewable energy projects locally and internationally, including the 10MW solar plant in Masdar City, the largest in the region, Shams1, a concentrated solar power plant capable of generating 100MW of power; Gemasolar, 19.9MW concentrated solar power plant, the first commercial-scale plant in the world to apply central tower receiver and molten salt heat storage technology; and London Array, a 1GW off-shore wind farm.

In addition, it has invested in intellectual capital at Masdar Institute to create new, green technologies and has brought together private and public funding on research and development and deployment.