At MEE 2018, which takes place at the Dubai World Trade Centre on 6-8 March, Atlas Copco unveils the latest innovations from its expansive power generation portfolio 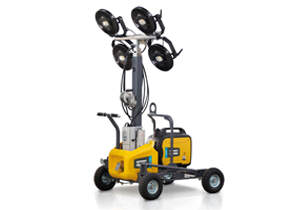 The HiLight V3+ and HiLight P2+ electric light towers from Atlas Copco are plug-and-play LED machines that can be plugged into any power source, including auxiliary power, directly into the grid, or a portable generator. (Image source: Atlas Copco)

The visitors are able to learn about Atlas Copco?s latest generator products and also participate in some Virtual Reality experiences as well as have the opportunity to meet experts from Atlas Copco?s newly formed Power and Flow division, who provide guidance on how the products introduced at MEE can help them successfully overcome the challenges facing both the global and regional power generation industry and outdoor lighting sector in the next 24 months.

Adrian Ridge, president of the Atlas Copco Power and Flow division, commented, ?Middle East Electricity is a fantastic forum to meet with the major players in the region?s power generation industry, and we look forward to sharing our vision with both new and existing customers about how Atlas Copco is ?Powering the Future? through innovations such as the new QAS VSG generator, TwinPower concept and its latest evolution in light tower technologies.?

Leading the way on the Atlas Copco booths is the QAS 35 VSG, which represents a game changer in terms of operational savings, performance and reliability. The superior low-load performance of the QAS 35 VSG, which features automatic variable speed control from 800 to 2550 rpm and a built-in power management system (PMS), enables fuel consumption levels to be reduced by up to 40 per cent against comparable models. At the same time it helps increase reliability in applications with an average load of less than 20 per cent, such as construction projects, outdoor events or telecoms service duties

The QAC 1450 TwinPower? generator is another new innovation being unveiled by Atlas Copco, which offers double the power and twice the flexibility for MPP applications. The QAC 1450 TwinPower is 20 ft. ISO containerised unit housing two compact 725 kVA generators; powered by V16 Scania engines and double bearing alternators. This configuration, with its fast-paralleling system, allows the two generators to work independently or in parallel with each other

Visitors to Atlas Copco?s booth have the opportunity to see the latest additions to its QIS industrial generator and QES portable generator ranges that includes models from 250kVA upwards. Also, on display are the HiLight V3+ and HiLight P2+ electric light towers ? energy-efficient plug-and-play LED machines that can be plugged into any power source, including auxiliary power, directly into the grid, or a portable generator such as the iP3500 or the iP2000, which are also at the show.