Deutz, a global internal combustion engine manufacturer, is displaying its latest products for use in mobile power generation at Middle East Electricity in Dubai from 6 - 8 March 2018 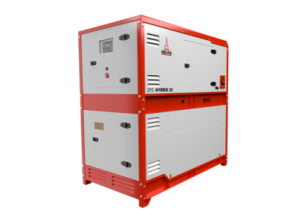 The genset aims to provide fuel savings of up to 65 per cent during operation. (Image source: Deutz)

Under the brand name Deutz Power Solutions (DPS), the company shows its Deutz F4M 2011 ?Telco? engine, a proven performer with outputs of up to 34 kVA that has been specially developed for generating power for mobile communication masts.

In addition, Deutz exhibits the DPS 20 Hybrid and DPS 250 models as examples of its range in the German Pavilion.

Deutz supplies a wide range of complete genset systems with outputs from 13 to 1,250 kVA. The DPS series includes both aircooled and liquid-cooled variants, with the standard package including integral fuel tanks, detailed monitoring functions and visual warning signals.

The visitors can also choose from optional features such as emergency power functionality and automatic tank filling, which aim to provide right solution for the customer?s specific applications.

?The DPS hybrid systems provide a particularly advanced and efficient hybrid operating mode, either battery-driven or powered by a solar module. The concept is that if the engine generates more electricity than needed, any excess energy is stored in the battery. If required, this energy can then either boost the engine or even act as the sole power supply source, resulting in fuel savings of up to 65 per cent. If the diesel engine fails, the battery is also able to keep the genset operational for up to 24 hours,? said the company.

The solar hybrid variant has a solar collector which focuses on providing most of the power needed by itself. The diesel engine starts up occasionally, providing additional support at power consumption peaks or on days when the sun does not shine, thus allowing low fuel consumption and maintenance along with a long service life.

More than 1,500 exhibitors from 126 countries are expected to assemble at the Dubai World Trade Centre for the Middle East?s biggest trade fair for the generation, transmission and distribution of energy.