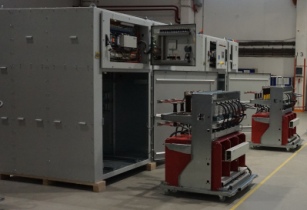 At the MEE 2019, the Germany-headquartered specialist will introduce the world?s first fully withdrawable SST System MV-CW in the voltage range of 3-6.6kV and 10/11kV.

The new and advanced feature in this new system is the ROLL on FLOOR Trolley. The trolley is equipped with line fuses, line contactor, softstarter power electronic and bypass contactor.

Michael Kleiboehmer, CEO of IGEL Electric GmbH, said, ?We launched the 3-6.6kV system last year with the promise to extend the product line into the 10/11kV power range. With the introduction and release in the market, we are now offering the full line to cover the major applications.?

?The design and engineering philosophy has strictly followed the guideline ?Maintenance in Mind? and ?Production First?. With the main components mounted on the ROLL on FLOOR Trolley, the exchange of the trolley will take less than 20 minutes and the system is ready for operation again. The detailed failure analysis can then be made without any pressure from production,? he added.

He further explained that exchanging the trolley does not require any special tools or instruments. ?There is a single industrial grade plug connection where all control signals and control power is interfaced between the trolley and the starter control electronic. The exchange does not require any new programme changes in the control electronic - just connect and start again.?

In addition to this innovative design, in 2018 IGEL Electric also introduced its new multi-motor softstarter system, allowing multiple motors to be started with just one electronic softstarter. The multi-motor system provides a more cost-effective solution compared to the typical one starter/one motor system. This system design has been successful in the Middle East market, according to Kleiboehmer.