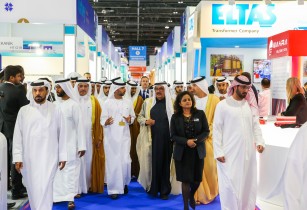 His Highness Sheikh Hamdan bin Rashid Al Maktoum, Deputy Ruler of Dubai and the Minister of Finance of the UAE, officially inaugurated the 42nd edition of Middle East Electricity (MEE2017) as Anita Mathews, the Group Director of Informa Industrial Group, talking on Solar Middle East (SME), says '98 per cent of visitors say it is now essential or important to their business'

The theme of Middle East Electricity 2017 is smart cities, as the show is hosted by the Ministry of Energy and in partnership with Dubai Municipality. MEE2017 will be showcasing special features designed to help the industry learn and develop to meet its goals to become smarter and more sustainable.

A new feature for 2017 show is the ‘Smart Cities Innovation Zone’. Located in Zabeel Hall 3, this dedicated area will feature the region's major players showcasing their latest advancements in smart technology via an interactive seminar space on the show floor.

SME is running alongside MEE as the region’s largest event dedicated to the solar industry. Speaking about SME, Anita Mathews, the Group Director of Informa Industrial Group, says, “This event has continued to go from strength-to-strength since its inception five years ago and now features over 130 exhibitors. Ninety-eight percent of visitors last year say that it is now essential or important to their business. Solar Middle East will also feature its own conference programme, ‘The Solar Agenda’, technical seminars and CPD certified professional workshops, whereby attendees can earn actual CPD points towards their accreditation.”

Discussing Smart Cities, Mathews says the Ministry of Energy and Dubai Municipality have played a key role in developing this year’s theme. “The government are currently working on a Smart City goal and will use Middle East Electricity 2017 to update the industry on their progress. This will be covered in one of the various conference streams taking place alongside the exhibition, and the event also features a showcase of the latest in smart technology in our ‘Smart Cities Innovation Zone’.”