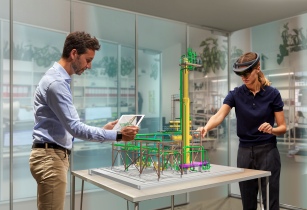 • Enterprise mobility (51 per cent vs global mean 31 per cent)

• Model Simulations (50 per cent vs global mean 25 per cent)

“New emerging technologies like AI are taking time to gain traction in the Middle East so the research findings mirror what we are witnessing in the market. AI has the potential to disrupt markets in the Middle East by creating innovative new services and entirely new business models,” commented Mohamad Awad, regional vice-president for the Middle East, AVEVA.

“We are already witnessing its impact in Europe and North America across several industries and market sectors and we are confident that the trend will follow in the Middle East region. With the eruption of AI, some of the market leaders five to ten years’ time may be organisations that are not even key players today,” Awad added.

The research has identified three major global investment priorities for organisations when it comes to embarking upon the digital transformation journey:

The research highlighted a strong demand for technologies that provide predictive outputs from large data flows, with AI and Analytics listed as the most important enabler (75 per cent), closely followed by Real-Time Data Visualisation (64 per cent), Augmented, Virtual or Mixed Reality (60 per cent) and Big Data Processing (59 per cent).

AI was a top three enabler across all industries globally, with the greatest importance assigned in Power and Utilities (81 per cent) and oil and gas (particularly upstream 79 per cent and midstream 78 per cent).

Advanced Process and Engineering Design was the second most important technology (74 per cent) and were in the top three technology priorities across all industries globally, scoring highest among Engineering, Procurement and Construction professionals.

This was perceived as an essential technology for global production, ranked as the most important enabler for Marine Ship Building (75 per cent), Buildings/Infrastructure (74 per cent) and Packaged Goods (73 per cent), with oil and gas and energy all ranking the technology highly.

Japan (85 per cent) and Germany (82 per cent) are early adopters with high importance attributed across all regions.

Stepping up cybersecurity and safety capabilities

Improving Safety and Security through technology investment was a priority across all regions, with the Middle East (68 per cent), Australia (63 per cent) and India (60%) per cent particularly highlighting this issue.