Faymonville low loaders in action for the Al Faris Group 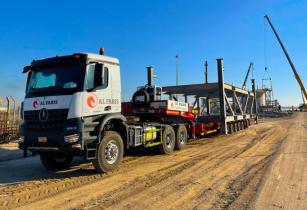 The Al Faris Group, one of the major players in heavy lifting and transport in the Middle East, has strengthened its fleet, with a total of five new eight-axle low loaders by Faymonville

The vehicles are set to transport long and heavy industrial components as well as crane components, and many other pieces of cargo in their daily work.

The loading platform can be extended up to a remarkable 33.5m, which is an outstanding advantage of the semi-trailers. Founded in 1992, the family-owned Al Faris Group handles the largest fleet of cranes and heavy equipment in the Middle East region.