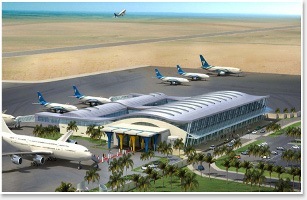 Both tender documents will be distributed till December 8 and will be open for pre-qualification on January 10, reported Times of Oman.

These tenders are part of a major government initiative to build four regional airports, which include Sohar and Al Duqm, to meet the increasing travel demand from tourists and businessmen to Oman. The overall development of Oman's new regional airports is being handled by the Ministry of Transport and Communications.

As many as five international and local companies, including Taylor Woodrow International, Carillion Alawi, MAPA Construction and Trade, Bahwan Contracting and 115 Construction & Installation, have conveyed interest in the Ras Al Hadd airport terminal project on the first day of the tender floating.

Taylor Woodrow International has also bought tender documents for the Adam airport project. Development of Ras Al Hadd airport is progressing well and the focus of construction is now on airside work after completing civil works. . The whole project includes the building of a four-km long runway, taxiways and air navigation and meteorology system.

Adam airport is a green field airport 30km away from Adam town and is the first airport to be commissioned among the four reports planned to link regions with Muscat. The airport will contain a four km runway. The majority of work of Adam airport is complete apart from work on the terminal building.

Adam airport has recently partially started operations with an inaugural VVIP flight from Muscat. The airport will open for commercial flights by end of 2012, according to sources at the Oman Airports Management Company. Sohar airport will be a domestic airport and used as an alternative to Muscat International Airport. The green field airport will be operational in 2013 and will have a four km runway.

Construction work is developing on several fronts with initial contracts, including site preparation and the building of an access road, having been awarded to Strabag Oman. The design work is progressing for the terminal building, which will be able to handle around 500,000 passengers per annum.