Etihad Rail, the developer and operator of the UAE?s National Rail network, and Dubai Industrial City, one of the region's largest manufacturing and logistics hubs and a part of TECOM Group, have announced an advanced freight terminal spread across 5.5 million square feet 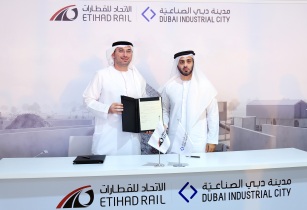 The terminal, which comes as a result of the collaboration between Etihad Rail and Dubai Industrial City over the past years, will contribute to cementing the UAE?s position as an international trade hub and boost Dubai?s global competitiveness in manufacturing, logistics, transport, trade, and investment. This comes in line with the UAE?s Railways Programme, which aims to facilitate trade by connecting the country?s industrial and manufacturing centres and opening new trade routes.

The announcement follows Etihad Rail?s achievement earlier in March 2022, of completing the connection of Abu Dhabi and Dubai with a direct railway within the ?UAE National Rail Network?, in the presence of Sheikh Maktoum bin Mohammed bin Rashid Al Maktoum, deputy ruler of Dubai, deputy prime minister and minister of finance and Sheikh Theyab bin Mohamed bin Zayed Al Nahyan, chairman of the Abu Dhabi Crown Prince?s Court and chairman of Etihad Rail. Their highnesses installed the final piece on the railway track, marking the start of a new phase of logistic and economic integration between the two emirates, and in preparation for linking the rest of the emirates to an integrated national railway network in the UAE.

The terminal at Dubai Industrial City will deliver a major boost to the UAE?s Industrial Strategy, also known as Operation 300bn. Increasing the industrial sector?s contribution to the economy by building advanced logistics infrastructure will strengthen the country?s position as the leading Arab nation on the World Economic Forum?s Global Competitiveness Report.

Shadi Malak, CEO of Etihad Rail, said, ?The terminal will contribute to strengthening the supply chain and freight logistics services, in line with the UAE?s efforts to develop the country?s transport and logistics sector. With a capacity of 5 million tonnes, the terminal will connect the industrial and manufacturing centres in the UAE, open new trade routes, and support the country?s sustainable development.?

?The announcement of the new terminal comes in line with the UAE Railways Programme, which aims to enhance the country?s transportation infrastructure through the development of the UAE National Rail Network, which play a key role in the country?s development, modernisation and urban planning. Through our collaboration with Dubai Industrial City, we look forward to providing our local and international customers with logistics and shipping services to support them in achieving their strategic goals and contribute to growing their business.?

Malek Al Malek, director-general of the Dubai Development Authority and CEO of TECOM Group, said, "The vision of our leadership has focused on enhancing our robust infrastructure and world-class transport system as they are essential drivers of economic development. Dubai has transformed into a global logistics and industrial hub in recent years, attracting leading regional and international players and enabling them to grow and expand from the emirate. The addition of rail into the UAE?s state-of-the-art infrastructure and transportation network will strengthen the nation?s leading position as a global trade and logistics hub.?

A global industrial and logistics hub

Through integrating Dubai Industrial City into the UAE National Rail Network, more than 780 companies, operating within the industrial hub - which provides direct access to Dubai?s main lines, Sheikh Mohammed bin Zayed Road and Emirates Road - will be able to benefit from Etihad Rail?s cost-effective, time-saving, and efficient rail solutions. In addition, more than 280 factories in Dubai Industrial City will also be able to benefit from Etihad Rail?s transport solution, which enhances the transport solutions available for these companies and supports the wider industrial growth in the UAE.