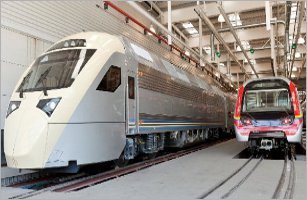 The North and South railway construction will cost around US$5.33bn to be built according to the Chairman of SAR, Mansour Al-Maiman. It will not include the compensations that will be paid for real estate expropriations.

Al-Maiman was speaking at the contract signing with CAF who will manufacture five passenger train sets for SAR and deliver them within two years. The project will be financed by the government either through issuance of sukuks, direct government funding from state budget or PIF, reported Arab News.

Al-Maiman stressed that major revenues of the project will come from cargo where some agreements have been signed with certain companies such as Aramco and agricultural companies for transportation of their products.

Beginning from Riyadh, the 2,750km railway will connect the Saudi Arabian capital with the northern town of Hudaitha, passing by Sudair, Qassim, Hail and Al Jouf.