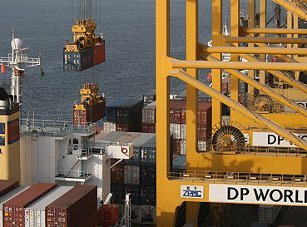 DP World has announced the construction plans of a 400-meter quay extension at its flagship Jebel Ali Port, increasing the capacity at the facility by one million TEU to 15mn TEU.

The expansion, expected to be concluded by the end of next year, will extend the quay at Jebel Ali Container Terminal 2 to 3,000 meters.

This will permit Jebel Ali to handle up to six vessels of 15,000 TEU simultaneously, hence improving efficiencies and reducing turnaround times.

"We have seen very strong container volume growth in the region, with DP World, UAE region handling a record 6.1mn TEU in the first six months of 2011," said the official.

"This further expansion of Jebel Ali demonstrates our commitment to deliver the best-in-class infrastructure for our customers and continues to ensure Jebel Ali is integral to delivering trade growth within the region," he added.

The UAE region also delivered its best ever quarterly performance with a second quarter throughput of 3.1mn TEU. The last major expansion at Jebel Ali was an additional five million TEU, which opened in phases from 2008.

T2 is currently equipped with 29 Super Post Panamax gantry cranes and 60 Rail Mounted Gantries (RMG), and with a draught of 17 meters, is capable of handling the world's largest container liners.