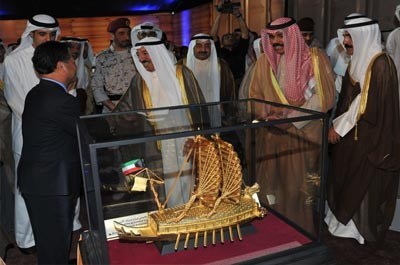 Kuwait laid the foundation stone at the seaport project at Boubyan Island which is part of a US$1.1 billion development programme for Boubyan Island.

The Mubarak Al-Kabir Seaport project will be built in four phases, Minister of Public Works and Minister of State for Municipal Affairs Dr Fadhel Safar stated, according to Kuwait Times.

"We have already begun with phase-1, which includes establishing expressways and railways connecting all parts of the island, as well as building bridges for cars and trains," Dr Safar said.

"The number of berths is expected to reach 60 with a depth of 20 meters each in order to accommodate large vessels. This would enable the port to receive incoming ships and stimulate cargo traffic, which would create new investment and job opportunities," Dr Safar said.

Hyundai E and C, CEO Kim Joong-kyum, the main contractor said: "we aim to turn the Mubarak Al-Kabir Seaport into the most eco-friendly and multifunctional hub for harbour logistics."