Dutch logistics company XELLZ has developed the ReelFrame, as a solution to transporting heavy cable drums or reels without the use of cranes when loading and offloading trailers at factories, storage places and at the job site 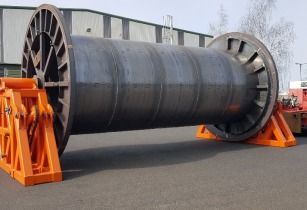 XELLZ is attempting to stabilise and make light work of one ongoing transportation challenge for the energy industry with their latest innovation. (Image source: XELLZ)

It has now received the first patent for the ReelFrame technology.

XELLZ is attempting to stabilise and make light work of one ongoing transportation challenge for the energy industry with their latest innovation. According to XELLZ, the concept has not been used before.

The concept for the cable drum transport is firstly to remove any and all lifting requirements, with the exception perhaps of lifting in and out of a river barge or sea vessel. The ReelFrame means that cable drums up to 100 metric tonne no longer need to be loaded for transport with a crane. Operational costs are now much lower, the process is safer, takes less handling, and allows for a quicker turnaround.

The prototype has already been manufactured and is the perfect solution for all onshore HV cable projects, and has received positive responses from project owners, cable manufacturers, and transport companies alike.

The ReelFrame invention can transport a cable drum or reel by means of a road truck and multi-axle trailer combination, with the cable drum supported by a frame and a high-voltage cable.

The frame holding the cable drum can be unloaded by decoupling it from the front and back trailer parts. Decoupling takes place after lowering the frame without the requirement of cranes. As the frame is transported in between both trailer parts, unloading can be achieved without using more space than the area already covered by the truck, trailer, and frame during transport.

The frame is designed with a dual purpose, firstly for holding the cable drum in a rotatable manner so that a high-voltage cable can be wound or unwound and secondly for transportation in between trailer parts.

Peter Bouwhuis, CEO at XELLZ, commented ?The design of the ReelFrame is such that the weight of the frame and the frame connector is at an absolute minimum. We are keeping it light and practical while maintaining the structure?s strength and integrity. For a frame that could transport a 100 metric tonne cable drum, the total weight is only seven metric tonnes.?

The ReelFrame is equipped with GPS and GPRS tracking as well as shock absorbers and cable consumption sensors.

The frame adapter weighs approximately seven tonnes and is connected to the frame by means of slip-slots or keyhole connecting points, and lock. When the frame adapter is connected to the trailer end, it will drive towards the ReelFrame and can be modified to the right height by adjusting the multiple-axle trailer hydraulic system. By bringing the trailer upwards and using the hydraulic system, the frame pins will slide into the pinhole locking to the adapter, then it is ready for transportation.

According to Bouwhuis, project requirements are often steered towards the use of longer cables which results in larger cable drums with weights reaching 100 metric tonnes per drum or more. This in itself poses the challenge of offloading such a cable on site, requiring a crane of at least 250 to 800 metric tonnes lifting capacity, depending on the location of the crane and the reach required to place the drum on the job site. A challenging task when job sites are typically not spacious and creating a larger site is costly if not impossible. Using heavy cranes also requires the surface to be compacted in such a way that it can withstand the forces that such cranes will bring on the site.

?The ReelFrame is going to be a game-changer for the cable industry, transportation and logistics businesses. Not only will it save time and space on projects, teams are really going to enjoy working with this well-engineered but easy-to-use piece of kit,? said Bouwhuis.