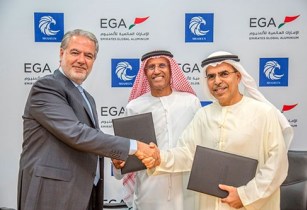 The construction of the plant is expected to boost KIZAD?s role as an industrial centre for Abu Dhabi and the UAE. (Image source: EGA)

Once it starts production early next decade, Shaheen?s ethylene dichloride and caustic soda plant will supply all its caustic soda output to EGA?s Al Taweelah alumina refinery for a period of 15 years.

According to EGA, this is seen to meet EGA?s needs for raw material.

Currently, the UAE imports all its polyvinyl chloride needs. The construction of the plant aims to boost the UAE?s production of caustic soda, an important raw material in industries from petroleum products to chemicals manufacturing as well as alumina refining. The new plant will be the first in the UAE to produce ethylene dichloride, which will be sold to third parties.

Shaheen envisages a later second phase of the project, which is set to double caustic soda production capacity and begin production of vinyl chloride and polyvinyl chloride.

Rashed Al Suwaidi, chairman of Shaheen, said, ?We now look forward to building our plant at KIZAD to supply EGA with the caustic soda it needs. We are also excited to become the first producer of ethylene dichloride in the UAE and to later bringing vinyl chloride and polyvinyl chloride production to the country.?