NAPCO plans expansion within and outside GCC 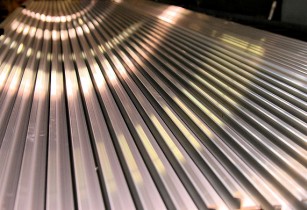 NAPCO is the first extrusion company in the Gulf to receive an ISO certification. (Image source: George Estreich/Flickr)

The Muscat-based NAPCO is one of the leaders in aluminium extrusions in the GCC. The company?s recent performance indicators have shown an increase in demand for its products, which have prompted shareholders and board of directors to increase production capacity.

According to the company website, NAPCO currently has a production capacity of 18,000 metric tonnes (MT) annually.

Sayyid Wasfi Jamshid Abdullah Al Said, chairman of the board of directors at NAPCO, said, ?NAPCO?s expansion initiatives will be implemented in three key phases ? starting off this year and the year thereafter. The move demonstrates our commitment towards increasing our output.?

To date, NAPCO exports a total of 70 per cent of its output to key markets that include the GCC, Europe, Africa and Asia. The expansion will help bring the company to a whole new level as it seeks to gain a wider reach in both international and regional markets, added Al Said.

The company, established in 1984, offers a wide range of aluminium profile extrusions in different finishes. It is the first extrusion company in the Gulf to receive an ISO certification, added the NAPCO website.