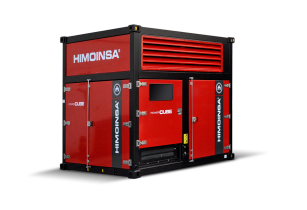 HIMOINSA adds seven new models with FPT engines to its Power Cube generator sets, supplying between 411kVA and 579kVA for the 50Hz and 60Hz markets. Their electric radiator has been fitted with a frequency changer that adapts its speed depending on cooling needs. This optimises fuel consumption by the radiator and so leads to the generator set running more efficiently.

The Power Cubes with FPT engines still have the characteristic compact dimensions of this range of generators, in 10-foot containers, facilitating transport and logistics. Their remote cooling system, installed on the top of the container, optimises space.

Two of the new models – HPCW 420 D5/6 and HPCW 505 D5/6 – can run at 50Hz and 60Hz interchangeably. These dual-frequency models are especially attractive for port applications or to meet the needs of rental companies, which work in different markets.

In addition, eight Power Cube HPCW– 500 D5/6 generator sets with C13TE7 engines and Cramaco alternators will supply all the power for the whole infrastructure required to hold Dakar 2018. HIMOINSA, the official power supplier of the rally raid, has designed a plan to supply power to the more than 10 camps that ASO plans to set up along the 9,000-km course, which will cross Peru, Bolivia and Argentina.

With the addition of the new models, HIMOINSA is expanding the power range of its Power Cube series, which already included four generator sets ranging between 500 and 700kVA with MTU engines.