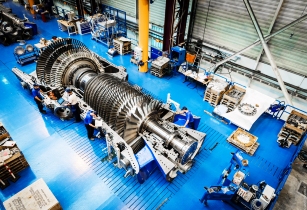 The facility will be equipped with three of GE?s HA turbines - the world?s largest, most efficient heavy-duty gas turbine - and generate up to 1.8 GW. (Image source: GE)

Equipped with GE?s HA technology, including the world?s largest and most efficient heavy-duty gas turbine, the flagship project is expected to be the most efficient power plant in the Middle East?s utilities sector upon completion and will enable SEWA to substantially improve the overall efficiency of its operations. The project will consist of three combined cycle blocks, the first of which is expected to come online in May 2021.

SEWA chairman Dr Rashid Alleem said, ?We are committed to strengthen Sharjah?s electricity infrastructure and provide seamless, affordable power. The proposed plant underlines our focus to promote public-private partnerships to drive a robust power production and management plan that is aligned with local energy needs, as well as the optimal utilisation of natural resources.?

Co-sponsors Sumitomo and GE Capital?s Energy Financial Services will partner with Shikoku Electric Power Company, and Sharjah Asset Management (SAM), the investment arm of the government of Sharjah, to form an equity consortium for the project. This will establish the project as the first independent combined cycle power plant in Sharjah, which demonstrates the strength of the emirate?s economy and its attractiveness for FDI. SEWA will purchase power from the consortium over 25 years under the PPA.

?SEWA has a clear vision for Sharjah?s power sector, and GE is honoured to partner with Sumitomo to deliver more efficient, reliable and sustainable power for residential and industrial users in Sharjah,? said Scott Strazik, president and CEO of GE Gas Power. ?The project brings together GE?s combined strengths in best-in-class technology, local presence, infrastructure and finance capabilities with our expertise in power plant construction, operations, and management.?

The record-breaking efficiency offered by GE?s HA units matters as using three GE 9HA units in combined cycle operations can also help SEWA reduce carbon dioxide emissions by up to four million tonnes per year, compared to current levels. This is the equivalent of taking one million cars off the UAE?s roads, substantially reducing the environmental impact of power production in Sharjah.