GE Power?s HA gas turbine and services portfolios have achieved new accomplishments including the 26th HA in commercial operation and the new MXL2 with additive manufactured performance upgrade for the GT13E2 turbine, also deployed in the Middle East 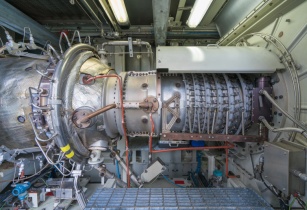 Introduced in 2016, GE?s HA is a leading advanced heavy-duty gas turbine across the world. It has delivered two world records for efficiency across 50 Hz and 60 Hz segments. The HA has achieved more than 118,000 operating hours and is the fastest growing fleet of gas turbines in the world with 76 units ordered by more than 25 customers across 15 countries

According to the International Energy Agency (IEA), world energy demand is expected to rise 30 per cent through 2040. To meet this increasing demand, natural gas, rapid rise of the renewables and energy efficiency improvements are expected to lead the way.

Other new milestones and accomplishments of HA gas turbine include:

? Work at the Porto de Sergipe power plant, in Barra dos Coqueiros, Brazil, is progressing with three seven HA.02 gas turbines and three generators arriving at the Sergipe port on 1 June. GE will supply the entire power island engineered package as well as the remaining balance of plant such as cooling towers, foundations roads and buildings. When complete, the plant will be capable of generating 1,516MW, the largest gas power plant in the country.

The technology aims to elevate the output and efficiency of existing 13E2 gas turbines. It aims to:

? Reduce component cooling requirements by up to 25 per cent

? Increase output up to 21MW in a combined-cycle configuration

? Achieve additional efficiency up to 1.6 per cent in a combined-cycle configuration

? Deliver maintenance intervals of up to 48,000 hours

The new MXL2 with additive manufactured performance aims to help gas plant power producers save up to US$2mn in fuel annually while opening up the potential for additional revenue of up to US$3mn annually in new power capacity.