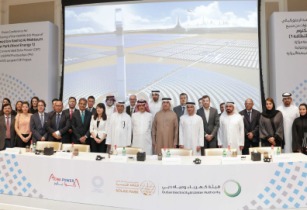 The project is in line with DEWA?s efforts to increase the share of renewable and clean energy in Dubai and strengthen the UAE?s position as a leading global hub for green economy. (Image source: DEWA)

Speaking to the press, Saeed Mohammed Al Tayer, managing director and CEO of DEWA, noted, ?This phase is the largest single-site investment project in the world. It uses both concentrated solar power (CSP) and photovoltaic solar technologies based on the independent power producer (IPP) model with investments up to US$4.30bn.?

?This phase will provide clean energy for 320,000 residences and will reduce 1.6mn tonnes of carbon emissions annually,? he further added.

Al Tayer further revealed that this achievement supports DEWA?s efforts to increase the share of renewable and clean energy in Dubai and strengthen the UAE?s position as a leading global hub for clean energy and green economy.

Mohammad Abdullah Abunayyan, chairman of ACWA Power, said, ?We made a decision to expand the project?s production capacity from 700MW to 950MW through a hybrid concentrated solar and photovoltaic plant, to ensure maximum productivity.?

Noor Energy 1, which was established by the consortium to implement the project, would be capable of 15 hours of thermal energy storage. ?Through this technology, we would effectively be supplying energy from the sun both day and night. The plant would be characterised by its 260M long solar tower,? concluded Abunayyan.