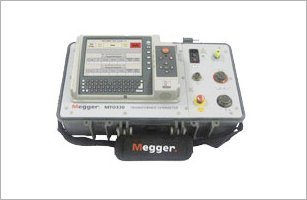 The MTO300 is controlled by Megger's PowerDB software running either on an external PC or on another transformer test product that has an on-board computer while the MTO330 is completely self-contained and has a powerful integrated computer running the on-board version of PowerDB, an 8.4-inch colour display and a full QWERTY keyboard.

Both instruments offer the same testing functionality which not only includes automatic six-winding measurements, but also three-winding measurements of HV and LV windings separately and single winding tests. The maximum test current in all cases is 10 A, and the maximum test voltage 50 V. Built-in discharge circuitry safely discharges the transformer when the test is completed, if a lead is accidentally disconnected, or if power is lost during a test.

With the automated six-winding test function provided by the MTO300 series transformer ohmmeters, resistance measurements can be made on all phases and windings of a power transformer without the need to disconnect and reconnect the test leads. Not only is this a big advantage in terms of convenience, it also reduces the risk of connection errors and makes possible big time savings particularly as, in many cases, transformer bushings are not readily accessible.

A further convenient and timesaving feature of the MTO300 series transformer ohmmeters is their use of simultaneous winding magnetisation ? both HV and LV windings are energised at the same time during testing. This gives fast reliable measurements even in traditionally challenging applications; such as those involving large transformers with delta connected low voltage windings.

The PowerDB software used in conjunction with MTO300 series instruments provides easy-to-read on-screen test forms to aid and speed instrument set up and test operation. It also allows results to be compared against user-defined pass/fail limits and to be stored in open XML data format. The software also stores historical data, allowing current and past test results to be readily compared and trended.