COMMERCIAL AND RESIDENTIAL property owners and tenants in Sharjah who have failed to take energy saving measures will have seen their electricity bills double by millions of dirhams in just two years, according to a recent survey.

The survey of the impact of rising electricity tariffs on consumers in the power hungry northern emirate was carried out by Farnek Avireal, a leading United Arab Emirates company advising building owners on how to dramatically cut utility bills.
The survey follows a recently announced 50 per cent hike in electricity tariffs which will see the Sharjah government continuing to subsidise half the actual cost of generating, transmitting and distributing electricity. Farnek Avireal believes its intelligent energy saving solution, already in widespread use in the UAE, can substantially reduce the impact by cutting consumption by 25 per cent in Sharjah, recently hit by power outages affecting thousands of consumers.
The survey (see graph) is based on actual buildings and shows the electricity cost of a Sharjah four star hotel of around 20,000 square metres increasing from AED2.5 million in 2007 to AED5 million in October last year.
Farnek Avireal say the cost of its Energy Saving Module ? which reduces electricity consumption from air conditioning and refrigeration systems by up to 25 per cent ? can be paid back in savings within 12 to 18 months. The Energy Saving Module is a green technology which reduces electricity consumption and maximum demand of air conditioning and refrigeration compressors. 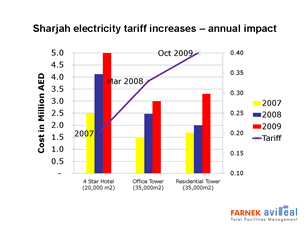 Farnek Avireal also conducts exhaustive energy audits, highlighting potential energy savings and through their comprehensive consultancy services, can make a series of recommendations that can not only reduce carbon emissions but significantly reduce energy costs.