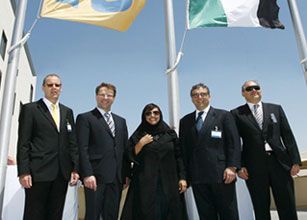 Doka Gulf FZE, a subsidiary of Doka Industry GmbH, announced its relocation to the company’s new U.A.E. headquarters in the Jebel Ali Free Zone (Jafza), to support rising demand for its innovative products and service offerings.

Looking to the tremendous growth opportunities in the U.A.E., the company has invested in expanding its operations and has now moved to a newly constructed 50,000 square metre facility, more than twice the size of the previous Dubai premises.

Doka Gulf’s headquarters include country management offices and a significantly larger warehouse and yard. The new location houses the largest Doka formwork ex-stock in the Middle East and provides ample space for Doka’s pre-assembled Ready to Use system solutions and product inspection and reconditioning services.

General Manager Peter Vogel said, “The United Arab Emirates is admired for its innovation and speed in complex, large scale construction and infrastructure projects.  Having worked on projects such as Burj al Arab and Burj Khalifa, it is a vibrant and important market for Doka – whose expansion is led by the UAE’s extraordinary opportunities. The centralization of our yard, warehouse and offices in the new Jebel Ali facility will further strengthen Doka Gulf’s customer service capabilities, enabling Doka to stand behind its product innovations and market leadership for the upcoming years.”

The Austrian Ambassador to the UAE, Dr. Julius Lauritsch, welcomed the economic driving force of DOKA for the Austrian economy as a whole and especially for the economic relations between Austria and the UAE.

“Whereas in 2009 due to the economic crisis we observed kind of a decline of Austrian exports to the UAE, the exports from Austria rebounded strongly in the year 2010 by increasing 16 per cent with a total number of EUR 498 million. Imports from the UAE last year surged by 100 per cent, totaling EUR 39 million”, the Ambassador said.

Salma Hareb, Chief Executive Officer, Economic Zones World, the parent company of Jafza, on the occasion said, “Doka has an established regional footprint. The new move reflects foresight on the company’s part and confidence in Jafza and Dubai’s strong standing as the regional trading hub and centre for infrastructure solutions. We hope the facility helps the company rapidly expand its market share and reach a wider base of clients. In the realisation of its local and regional business aspirations, Doka has Jafza’s continued support.”