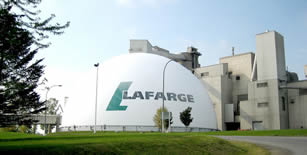 Emirates Cement Company has now been rebranded as Lafarge Emirates Cement. Exports account for 30-40 per cent of output from Lafarge's quarry and three million tonne capacity factory. CEO, Antoine Duclaux, said that the change in name reflects his company's changing priorities. "We're still happy with the volume of sales in the region," said Duclaux. "But at the time, like all manufacturers, the objective was to sell domestically in Dubai, which we did. But now like most big players we export to Oman and some other captive markets, like Kuwait and Iraq and we are also targeting the Indian Ocean islands, like Mayotte and Mauritius."

The French building and construction materials specialist has also announced that its cement plant, built in Kharab Ishq village in the Aleppo countryside, Syria, in partnership with Syrian MAS Economic Group, has started production with a capacity of three million tons of cement per year.

According to the Syrian Arab News Agency, Chairman of Lafarge, Bruno Lafont, said the plant will help achieve self-sufficiency in cement to cover the local market needs and provide about 1,000 jobs for local people in the area, pointing out that the money invested in the plant reached US$680mn. Lafont went on to say that the plant will prove very beneficial for the local building sector by providing high-quality products as it is equipped with up-to-date machinery and meets international environmental standards and security and safety criteria.

Lafont said that the plant indicates Lafarge's confidence in the Syrian government and in the Syrian market which is rapidly expanding. Construction work on the plant started in 2007.