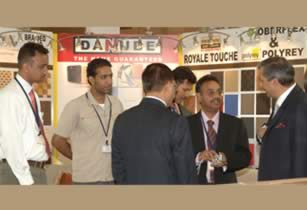 ONCE AGAIN THE annual gulfBID exhibition will be a key venue for nearly 200 exhibitors, all hoping for a slice of the billion-dollar markets for constructionrelated goods and services in Bahrain and the rest of the Northern Gulf. Organised by local Al Hilal Group in association with dmg world media Dubai* it will be open from 5-7 May at the International Exhibition and Convention Centre in Manama.

Two core sectors will again be featured this year. First the Construction show-within-a show will concentrate on the following sectors: Aircon/refrigeration; bathrooms/ceramics; building/construction materials; cleaning/maintenance; glass/metal; marble/stone-working machinery; water/environmental technologies. In addition there will be general building exhibits related to specialised construction equipment and vehicles, some of them too large to display indoors. All aspects The co-located Interiors halls will display the following products by sector: Flooring; Furniture/ accessories; Interior design services; Lighting; Outdoor living; Shopfitting; Textiles/upholstery. “Crossover” joint viewing and buying opportunities from the two closely related segments will be considerable as the show’s brief is to show all aspects of a building’s construction and fitting out.

Visitors from the Emirates will be welcome, but no other event in the region concentrates on the four key countries in this way with these particular niche categories. Using independent data supplied by ProLeads the organisers point out that total project investment plans are currently slated by country as follows: Saudi Arabia – US$1101 billion; Kuwait – US$354 billion; Qatar – US$258 billion; in addition to the US$85 billion accounted for by Bahrain itself. In addition visitors from the more distant UAE and Oman, and probably also Iran, are expected too. Civil works in all these countries easily predominate, the ProLeads team say, but power, energy development and industrial works will all account for healthy import growth of the kind of products being shown at gulfBID this year. It all adds up to “A year’s worth of sales and marketing in just three days...

Quality buyers and specifiers want to meet you” the promoters say, and all in the commerce-friendly and cosmopolitan environment of causeway-connected Bahrain, with its excellent air links as a hub centre to both the GCC countries and the rest of the world. Despite its resident population of less than three-quarters of a million for many years the island has been one of the Gulf region’s key centres for local oil trading, banking and other financial services, and for African/South Asian commerce in general. It is also a major world oil refining and petrochem production centre, boasting several technical ‘firsts’ such as routes to low-sulphur diesel, in its own right. Its aluminium refining and processing industries are large in scale, too, in turn supplying a number of light industries such as food processing that have built significant market shares elsewhere in the Gulf.

The established Saudi causeway has already shown clearly that Bahrain’s fixed links with neighbouring countries are central to its successReputation Within Bahrain itself the following prestige projects are all noteworthy. First the Durrat Al Bahrain joint residence/tourism complex is being successfully developed on a series of islands, with its own marina, in the quiet southeast – designed as a local waterside retreat.

Then the smaller Al Areen Desert Resort is being developed on the main island around a specially constructed water park with its own wildlife sanctuary; other mixed-use schemes have been designed to attract high spenders and reinforce Bahrain’s centuries-old reputation as the Gulf’s key financial and commerce centre. Within the city itself key developments include the mixeduse Bahrain Bay development on reclaimed land – a Raffles-branded hotel is on the way - and the related Financial Harbour scheme within the central business district itself. And on its way further down the line of course is the jointfinanced and colossal Friendship Causeway scheme, one of the world’s most exciting civils projects, that will eventually be linking the island with gas- and culture-rich Qatar.

The established Saudi causeway has already shown clearly that Bahrain’s fixed links with neighbouring countries are central to its success as a regional business and industrial centre, adding significant value in various forms to the products of its resources-richer neighbours. To sum up, the Bahrain of today is the entire Northern Gulf in miniature and the gulfBID trade exhibition will be once again an excellent user-friendly entry to the region for those international suppliers who may be new to trying out their products, patter and business practices here in the Middle East.