Jeddah Economic City and Jeddah Tower get funds worth US$2.23mn

The Jeddah Economic Company (JEC) and Saudi Arabia?s Alinma Investment have signed a deal to initiate a fund for US$2.23mn 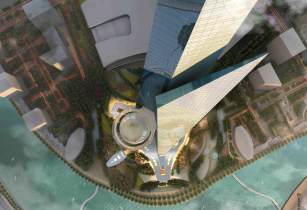 An artist's impression of what the Jeddah Tower's observation deck will look like once completed. (Image source: AdrianSmith-Gordon Gill Architecture)

Additionally, other real estate investments will also be completed using the fund, revealed the company.

Kingdom Holding Company chairman Prince Alwaleed said, ?This agreement with Alinma is part of Jeddah Economic Company?s drive to diversify its sources of funding for Jeddah Tower and Jeddah Economic City. Our cooperation with the banking sector is a manifestation of just how strongly we believe in this ambitious project, which is set to become the pride and joy of every Saudi, especially those who reside in Jeddah, and will become an iconic urban centre that will take the city to the next level, both regionally and globally.?

While Jeddah Tower, once completed, will become the tallest tower in the world, the Jeddah Economic City will provide a fully-equipped living, working and entertainment environment spread across 1.5 sq km.

It will be designed to become a ?must-go? destination for business, trade, entertainment, culture, medical treatment and education, and be a trendsetter in real estate and urban development. The area will also focus on securing job opportunities for locals and the rising demand for quality housing.