Khatib & Alami has used Bentley System?s ContextCapture and LumenRT to create digital twin of Muscat to help the nation improve security and plan for flooding events 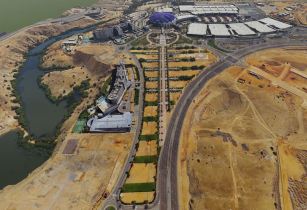 Incorporating high levels of accuracy into a nation-scale digital twin

To improve national security and improve preparedness for climate-related disasters, the Sultanate of Oman wanted to create a detailed digital twin of approximately 250 sq km of the Middle Eastern country in and around Muscat. They contracted Khatib & Alami to capture 330,000 images with unmanned aerial vehicles (UAVs) and construct a 3D reality model of the area, which included 43,000 fully textured buildings. To meet Oman?s needs, Khatib & Alami had to produce a resolution of 10 ground sampling distance (GSD) and provide relative accuracy of less than 20 centimeters. Additionally, the project needed to serve as a model to help build similar 3D modeling services in the region.

Every aspect of the complex project had to be finished within a deadline of 125 days. Additionally, due to the country?s airspace constraints?including working around classified areas and commercial flights?they only had 14 days available for flying and image capture. Adding to the pressure was the weather, which presented a challenge with harsh sunlight, high temperatures, elevated humidity, and windy conditions. As they prepared to take on the project, they discovered that captured images could not be geo-tagged due to limitations in the UAV hardware. As a result, they needed to seek out software that could mark ground control points to provide model accuracy.

Khatib & Alami determined that overcoming the flight challenges would require careful management, with teams working in parallel to check the accuracy of captured images during the limited flight time. Simply put, they could not afford to have any major errors at the end of the image capture, as they could not go back and recapture any images after the first 14 days. Seeking the best software for accurately capturing data the first time and quickly producing a reality model was key to both meeting the deadline and producing the high level of detail that their client required.

Before the project began, Khatib & Alami examined various applications to determine what would help them best execute the project. One application produced image sizes that were too large, which would slow down the pace of image processing over the large production area. In addition, it lacked tiling capabilities, which would result in significant image damage that would also present obstacles to project completion in the tight timeframe. Another application could not produce accurate enough GSD calculations to meet the high standards set by Oman, while a third failed to produce strong quality when spread over the large project area.

They finally found the solution to their challenges when they examined the capabilities of ContextCapture, Bentley?s reality modeling application. They discovered that ContextCapture supports efficient reality capture of large areas and can quickly produce information in a variety of formats, including KML, high DSM, low DSM, and i3s for full, smooth GIS integration. Tiling support helped them overcome data errors during capture by finding matches for the correct images, and reconstruction algorithms helped them seamlessly integrate differing image brightness levels and angles. ContextCapture also supports running parallel processing on multiple powerful hardware systems simultaneously, which helped them define and manage the size and schedule of the project.

Khatib & Alami took advantage of ContextCapture?s interoperability to export the captured data into a third-party application that they were already familiar with to produce the 3D reality model and fully texture the 43,000 buildings. With Bentley?s LumenRT, they brought the digital twin to life with animated videos that could simulate flooding and produce a day/night cycle. The simulations now allow the Oman government to determine secure routes in case of climate emergencies and improve security in hidden and rugged areas.

Taking advantage of powerful capabilities to go beyond expectations

With the help of Bentley applications, Khatib & Alami far exceeded expectations. Their UAV flights captured more data than anticipated and, as a result, they were able to expand the survey area from 250 sq km to 280 sq km, all within the same 14-day deadline. While the original plan was to achieve a GSD of 10 centimeters and a DSM accuracy of 20 centimeters, the result had both a GSD and DSM accuracy of five centimeters, in some cases ranging up to a two centimeter accuracy. By automating the vectorisation process for building textures, they were able to fully texture the 43,000 buildings in just 30 days.

Even with the greatly improved results, Bentley applications helped Khatib & Alami save time and costs during the design process. Automation allowed them to reduce resource hours, saving US$150,000. Additionally, the team finished the project in just 90 days rather than the 125 days budgeted, which lowered costs by another US$48,000. The cost savings are now passed onto the Oman government, as they are leveraging the digital twin for complex scenario planning and optimised solutions that keep the country secure and prepared for any potential disruption to regular life.