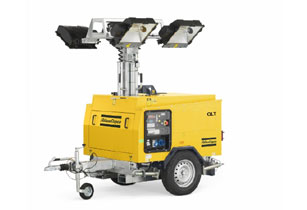 These light towers provide maximum visibility for 24 hours, according to Atlas Copco. Each tower has a hydraulic mast that reaches a height of 9.2 metres in 15 seconds. In addition, the tower has four outrigger stabilisers for support.

Bouna Merouane, energy service chief of National Establishment of Air Navigation, said, “While at first glance, it might seem unusual to use mobile light towers instead of fixed units, it has really worked out for us. They’re easy to operate, versatile and can be maneuvered.”

QLT H40 uses metal halide lamp technology, which is one of the most energy-efficient ways of turning electrical energy into light and the expected lifetime of the four 1000W metal halide lamps is very long. The failure rate is reportedly the lowest among various types of lamps. A single switch controls the main light and power functions.

In addition, the mobile towers can run on either grid electricity or fuel, providing a back-up solution in case of grid failure. If there is any emergency, these towers can be quickly moved to a different location, added officials.