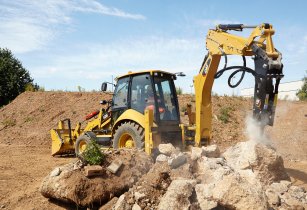 The E-series hammers are designed for use with mini excavators, skid-steer loaders and backhoe loaders, and available in silenced and side-plate versions, stated Caterpillar.

Silenced hammers, identified with “S” in the model designation, use a fully-enclosed housing to suppress noise – considered a valuable feature in sensitive work environments and in small-machine applications where the hammer is in close proximity to the operator. The suspension system on the silenced models include buffers at the top and bottom to absorb reflective forces and isolate them from the machine. A suspension jack helps dampen vibration and sound. The result is quiet, reliable operation and reduced operator fatigue. Side plate, or non-silenced models are available in the four sizes – H35, H45, H55 and H65.

Flat-top models allow versatility for installation on Caterpillar and equipment made by other manufacturers. Pin-on models are available for the H55E and H65E in applications that require a dedicated, hammer-equipped Cat machine.

The four sizes are available in two mounting configurations for installation on Caterpillar and competitive carriers.

The Caterpillar E-series hammers possess several features, which assure convenient installation, comfortable operation and long hammer life. They are designed and engineered to match auxiliary flows and pressures of Cat machines. In addition, hydraulic ports are positioned for convenient installation – as soon as the hammer is plugged in, it is ready to perform.

To protect the hammer from internal stress, an automatic shut-off can be activated. This stops the piston instantly when the hammer breaks through material, which in turn protects the hammer from blank-firing.

Aside from user-friendly features, the new E-Series hammers include 47 per cent fewer parts than their D-Series predecessors did, allowing for quicker and easier servicing. When it comes to daily maintenance, a single grease point is conveniently located and easily accessed. Tool changes are accomplished with common hand tools.