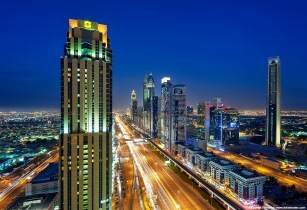 ?The new project is a part of a major upgrade to Al Wasl Street and Jumeirah Street as part of RTA?s masterplan for upgrading the network of roads, bridges, crossings and tunnels to accommodate the growing traffic movement and improve mobility throughout Dubai,? added Al Tayer.

He revealed that the plan aims at developing integrated solutions for roads as well as land and marine transport networks that are safe for users, compatible with the comprehensive development plans, addressing the needs of demographic expansion, and contributing to sustainable development and investment in the emirate.

The project will link Jumeirah Street with Al Khail Road and parallel streets such Al Asayel and First Al Khail Road through two-level bridges and roads from Umm Al Sheef Street in the direction of Shaikh Zayed Road up to Latifa Bint Hamdan Street, and from Al Zomorrud Street to the east up to the Shaikh Zayed Road.

?The new bridges will be constructed above and below the Red Line of Dubai Metro without affecting the operation of the metro. The two bridges will be linked with the Shaikh Zayed Road through ramps enabling free exit points,? he explained.

The project also includes the construction of a flyover on Latifa Bint Hamdan Street intersecting the First Al Khail Road, while a signalised ground level junction will also be developed underneath the flyover, along with the improvement of the intersection of Umm Al Sheef Street with Al Wasl Street.

Construction of key surface roads, improvement of service roads and landscaping works will also be done all along the Shaikh Zayed Road in the sector from Al Safa Interchange to Al Manara Interchange as well as at Umm Al Sheef Street, Latifa Bint Hamdan Street and Al Zomorrud Street.

?RTA has set out a comprehensive plan for a smooth traffic flow at traffic diversions. According to the plan, the design of the temporary traffic diversion fully conforms to specifications of the permanent roads in terms of engineering design, and the degree of surface and asphalt level to ensure the safety of road users,? Al Tayer noted.

The project is expected to be completed in Q1 2018.