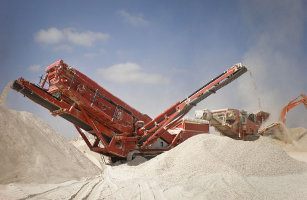 The Salalah Bypass will be fully operational in 2011 after a year of construction work has taken place on the US$ 50.6mn high way development in Salalah.

The bypass will have four lanes and will be 32 km long. It will span the entire length of Salalah City as it runs from Raysut in the east, towards Ayn Razat in the west. The Salalah bypass has been placed on a fast-track footing by the Supreme Committee for Town Planning - an organ of Oman's Ministry of National Economy.

The contract for the US$ 50.6mn project was awarded to the local construction firm, Oman Building and Contracting Company, with the well known Omani engineering consultancy, National Engineering Office (NEO), the design consultant for the project.

The processing of materials during the construction period was very important and it was decided that the crushing equipment used on the bypass would be manufactured by Sandvik Mining and Construction. The Sandvik fleet has been supplied through the Sandvik dealer in the region, Al Fairuz Trading & Contracting Co.

A reason for the acquisition of the Sandvik machinery was due to the fact that at various locations in the project, crushers and screening systems were needed to be used in conjunction in order to produce a range of base materials.