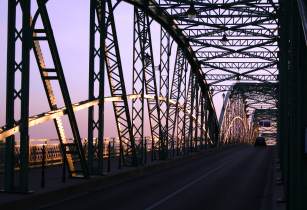 Saudi Arabia?s King Salman Abdul Aziz has announced a plan to build a bridge over the Red Sea between Egypt and the Kingdom with the aim to boost trade exchange

Egyptian President Abdul Fattah Al Sissi said that this heralds a ?strategic partnership? between the two Arab allied countries. The bridge will be named after the Saudi Arabian king.

The North African country is a partner to Saudi-led military coalition that has since March 2015 been undertaking an aerial campaign in Yemen against rebels backed by Iran that is Saudi Arabia?s regional rival.

Egypt has also joined an anti-terror Islamic coalition unveiled by Saudi Arabia late last year. However, unlike Saudi Arabia, Egypt has not called for the resignation of Syrian President Bashar as a solution to the Syrian conflict.

The two leaders also attended a ceremony marking the signing of 15 cooperation agreements covering a range of fields including trade, housing, transport, education, culture, manpower and a university in Egypt?s South Sinai.

Saudi Arabia is among Egypt?s top investors with an estimated US$27bn.