Hundreds of experts set for clean energy discussions in Dubai 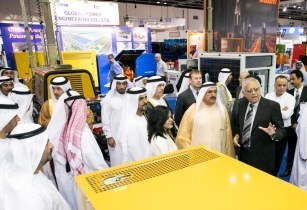 The Green Energy Conference, which will take place at Middle East Electricity on February 11th, is set to attract 300 public and private sector stakeholders who will discuss some of the biggest challenges and opportunities facing the Middle East?s clean energy sector

Dubai Municipality?s (DM) vision for a sustainable future will be presented as a model example of embracing cleaner power production at conference, which returns for the second year in a row.

Hussain Nasser Lootah, director general of Dubai Municipality, will look to highlight new initiatives undertaken by the government authority in collaboration with the Environmental Center for Arab Towns (ECAT) to reduce energy consumption by more than 20 per cent in the next three years, through the adoption of innovative solutions to save up to 10.5 GWh on energy consumption and 6,200 tonnes of C0? emissions per year.

Anita Mathews, director of Informa Energy Group, organisers of Middle East Electricity, said, "Energy consumption has grown so quickly in the region that some countries are having difficulty meeting demand, resulting in power cuts during peak times in summer.

"Key regional efforts to increase energy efficiency will be highlighted at the conference, but the most important aspect is to bring people together to instigate dialogue about this important issue and help them communicate with dignitaries from the region to make connections that can lead to real business outcomes," Mathews added.

Middle East Electricity is the region's largest and longest running power event and will cover more than 50,000 sqm of exhibition space this year. The show will be co-located with Solar Middle East, which will return for its second edition.

"After a highly successful edition in 2013, where 18,166 unique visitors walked through the exhibition halls, we are now looking forward to a successful 2014 edition, which will host some of the biggest names in the global energy industry," remarked Mathews.