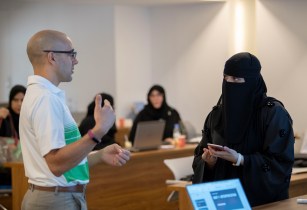 60 per cent of the enrollees in the pilot phase of the programme were women. (Image source: Misk Foundation)

Saudi Arabia, under Mohammed bin Salman, has seen a slew of reforms aimed at diversifying the economy away from oil revenues and creating jobs in the private sector.

The country is looking to publicly list a part of its state-owned oil giant Saudi Aramco.

?H.R.H. Crown Prince Mohammed bin Salman?s recent visit to London and other cities focused on the importance of international collaboration and our partnership with General Assembly is showing, in a practical way, the impact this has on young Saudis and our rapidly transforming economy,? said Deemah AlYahya, CEO of Misk Innovation.

The training programme, focussed on the practical application of skills, will be run by General Assembly instructors at the Misk headquarters in Riyadh.

?General Assembly is excited to be part of the radical transformation happening in the region, and to support the tremendous men and women who are looking to acquire new skills and transform their careers. The massive demand for this pilot program highlights the excitement and enthusiasm among young people in Saudi Arabia to become leaders in the digital economy. We are excited to empower the students in this pilot cohort and continue to partner with Misk to build the next generation of leaders in the Middle East,? said Jake Schwartz, CEO of General Assembly.