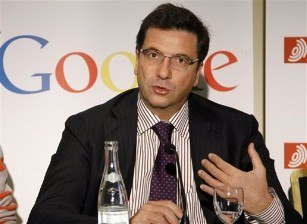 More than 95 per cent of small businesses in the region lack a presence on the internet, says a senior executive at Google.

Small and medium-sized enterprises (SMEs) in the MENA region are losing revenue because of their failure to embrace the web, said Carlo d'Asaro Biondo, Google's vice president for the Middle East and Africa, southern and eastern Europe.

"In the Middle East and North Africa, less than five per cent of SMEs have a website. In Europe, it's about 20 per cent to 45 per cent, depending on the country," he said.

"[Those not online] lose their ability to do any e-commerce activities, so they can't sell on the web. The second thing is that they lose the ability to present their products." Mr Biondo said Google arrived at the figure of 95 per cent by counting the total number of internet sites in the region and then comparing the figure with the estimated number of SMEs.

Google last week signed a deal with the Jordanian government that it said would encourage the local development of the internet. Ten government entities in Jordan agreed to spend US$10mn (Dh36.7mn) on online advertising through Google. Under the terms of the deal, the US search engine giant agreed to reinvest US$2.5mn to help promote the local internet industry.

Mr Biondo said Google would be open to forming similar deals with other governments in the region, including the UAE.

"It's premature to say that this will be done - but we will be at the disposal of the UAE; if the UAE wanted to do something like this, we would certainly sit down and discuss it with them," he said. "We would very much like to."