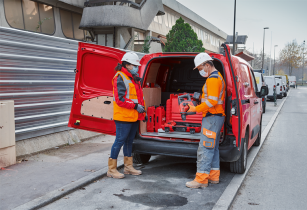 Hilti, a professional tool manufacturer, has taken its sustainability efforts to the next level with its new range of fully electric vehicles

The vehicles, which will begin a phased rollout across the UK in 2021, emit 3x less CO2 than fuel vehicles over their entire lifecycle – allowing Hilti to reduce their carbon footprint in line with their sustainability strategy.

Staff will be required to have an electric charging point installed at their home free of charge, which they can use to charge their car every evening. If this isn’t an option, employees will be offered a self-charging hybrid vehicle instead, although electric is being highly encouraged if installation is possible.

Due to mileage limitations, Hilti has yet to find a suitable electric replacement for their fleet of Ford vans, but will temporarily move to Peugeot as a more sustainable alternative. While the Peugeot Expert and Peugeot Partner vans emit up to 15% less CO2 than Ford, Hilti plans to review their options in 2022 to move to full electric.

The phased rollout is expected to be complete by 2024, at which point the motor industry will be well on its way to developing even more electric and hybrid vehicles. In fact, with the looming ban on the production of combustion engine vehicles in 2030, we can expect to see a growing number of businesses converting to electric sooner rather than later.