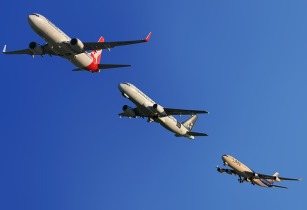 As one of the first international flights from the new airport, it demonstrated the strong links between the UAE and Saudi Arabia.

The new King Abdulaziz International Airport, which has been soft-launched in 2019, will be able to process 30mn passengers per year, with more than 800,000 sq m of airport lounges and the world?s largest aviation air traffic control tower, standing at 136 meters. Saudia will be operating a daily flight from Jeddah to Abu Dhabi and vice versa.

Speaking of the flight?s arrival, Bryan Thompson, CEO of Abu Dhabi Airports, said, ?The UAE has enjoyed historically close relations with Saudi Arabia and the city of Abu Dhabi is a top destination for tourists from across the kingdom looking for a short break in the GCC.?

?Those visiting us from Jeddah will be able to experience all that Abu Dhabi has to offer, whether that is the stunning Sheikh Zayed Mosque, the Louvre Abu Dhabi, or the recently opened Presidential palace, Qasr Al Watan. Saudi nationals who transfer through Abu Dhabi to destinations in the United State of America will also be able to make use of our US Immigration pre-clearance facility, allowing travellers to the US to clear the American border before they fly,? Thompson added.